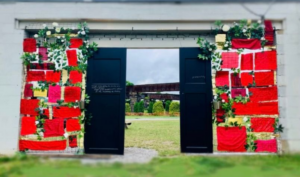 Aspinwall, PA   Aspinwall Riverfront Park is honoring Juneteenth with a work of public art.  “As an African American who lived in Galveston, I want to convey that our history is part of all of us.  Juneteenth celebrates the start of freedom and the struggle for equal rights that African Americans still fight for to this day,” said ARP Board Member Winfred Frazier.

The artwork entitled “Opening Doors”, was conceived of by the Park’s Founder Susan Crookston.  The work is highly symbolic and is composed of fencing, fabric, flowers and doors.  Squares of red fabric that have quotes from a variety of historic figures – including Martin Luther King Jr., Maya Angelou, Brianna Taylor, Desmond Tutu, Barak Obama and many others – express the meaning of the Juneteenth holiday.  The color of the holiday is red, and the fabric is designed to look to look like quilted bricks on which the movement towards freedom and equality is built.  Occasional gold pieces symbolize the potential quotes of future leaders, and the white flowers climbing through the piece symbolize the joy and resilience of the African American community.

There is a strong quilting tradition in the African American community.  “Generations ago, my grandparents were part of the underground railroad,” said Susan Crookston.  “During that time, quilts with specific patterns would be hung on clotheslines or over railings to symbolize a safe house.  Others quilt patterns symbolized escape routes for slaves leaving plantations.   In this same vein, we want the Park to be a refuge and welcoming space for all.” 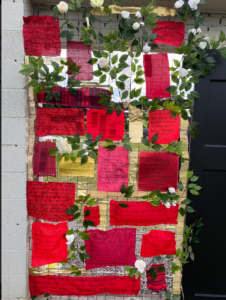 The artwork was constructed with the help of volunteers including high school student Monica Chen who said, “It’s a privilege to be part of creating something like this.”

The public is invited to write their dreams for the Country – or a quote they find inspirational – on a pair of chalkboard paint painted doors at the center of the piece, which symbolize the opening a new door to a new chapter of American history.  “The society we create is not an accident.  When we dream alone it’s only a dream.  When we dream with others it’s the beginning of reality,” said Crookston.  “We hope to be part of creating a better world for us all.”

“At the center our Park’s values, from its very beginnings, has been a focus on being inclusion and being welcoming to all,” said Founding Board Member Trish Klatt.  “We hope this artwork enhances the feeling, and invites people to dream of a better community for all.”

“Opening doors” will be at the Park starting the week of June 19th.