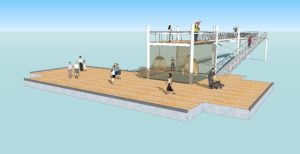 Aspinwall, PA  Thanks to generous gifts from the Estate of William M. Cadwallader and the support of the Hillman Family Foundations, Aspinwall Riverfront Park is embarking on a major project to build an expansive public fishing dock on the Allegheny River.  In keeping with the innovative design of the Park, the dock will feature hanging chairs over a mesh section of flooring which will allow park visitors to look into the water while they are swinging.  It will be accessed through a handicapped accessible gangway, which has the ability to be locked when the Park is closed.  The dock will also feature a “flyover” segment where people can walk out over the River.

Mr. Cadwallader passed away last year and his niece and executor, Robin Durr, was able to talk with him before he died about where he wanted to make some gifts.  His love of the outdoors and fishing made this a perfect choice.  “This gift is transformative and will allow people to connect to the River in a really unique way.  We couldn’t be more grateful to Mr. Cadwallader for funding this huge project,” said Susan Crookston, the Park’s Executive Director.  “The Hillman Foundation’s additional contribution to the project allowed us to be especially creative, incorporating the swinging chairs and mesh into the design.  There will be nowhere else like this on the River.”

Bill Cadwallader grew up in Crafton with his sister Marjorie and he spent much of his free time outdoors.  He served in the U. S. Air Force from 1950-1954 and when he returned to Pittsburgh, he worked at Duquesne Light Co. for the next 35 years, retiring as a master mechanic.  Robin Durr commented that “Bill would be so happy about having this project become a reality and would be thrilled that so many more people will be able to enjoy the River.  He lived simply and it’s wonderful that his legacy as an outdoorsman will be carried on in this way.”  The Durrs especially hope that local veterans and children from around the region can learn to fish at the Park.

Bill’s Dock at Aspinwall Riverfront Park is expected to be complete and open to the public in early June.