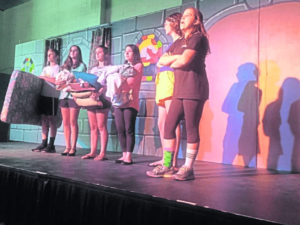 After alternating venues for the past few years, Stage Right Performing Arts & Education has a new home for the 2019 season.

The former O’Hara-based acting company will perform all of its shows this year at Aspinwall Riverfront Park.

“Stage Right is an evolving, volunteer-driven community effort,” said Jamie McDonald, director of publicity. “After over 50 years of bringing theater to our community, 2018 was most decidedly the year of change for our organization.

“With new leadership and a re-energized commitment to ensuring artistic growth in our community, Stage Right is very excited to announce new community events with Aspinwall Riverfront Park.”

Aspinwall Riverfront Park is a 10-acre campus at 285 River Ave.

Its open-air marina building is a dynamic facility with river views and a smaller stage among the park’s native plants.

Before the move to Aspinwall, Stage Right performed at The Oaks Theater in Oakmont after moving from the Lauri Ann West Community Center in O’Hara.

In its 54th season, the group has announced the formation of a junior board of directors. McDonald said it was spurred by the success of a fledgling program last year. The board will be comprised of teens from the Fox Chapel Area School District and will help reach out to young people interested in stage production.

The group plans to kick off the season with a special winter musical event, “The Last Five Years,” written and composed by Jason Robert Brown. The modern musical chronicles the five-year life of a marriage and will be performed Feb. 14 to 16. It features locals Jenna Hayes and Will Docimo.

The third show will be the young artists summer musical, “The 25th Annual Putnam County Spelling Bee.” The Tony Award-winning musical will be performed by a cast made up of high school-aged teens from the region and a live pit orchestra. It will run Aug. 1 to 4.

Stage Right always is looking for people to help behind the scenes. Anyone interested can email artistic director Bill Ivins at contact@stagerightpgh.org