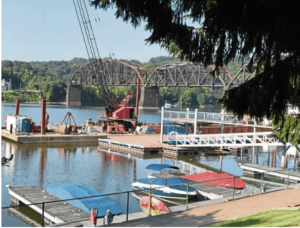 Workers from Marion Hill Associates complete work at the Aspinwall Riverfront new dock that includes a mesh section and swings.

It was a year of ups and downs in the Lower Valley, with several significant news events happening in each of the communities The Herald covers.

Here’s a look back at a few:

Sharpsburg landed a number of major grants to help transform the community. In June, the borough got a $500,000 federal grant to help upgrade the business corridor into a pedestrian-friendly streetscape with safer sidewalks, lighting and benches.

Money came through the U.S. Department of Housing and Urban Development.

The makeover will help attract diverse shops and visitors to the borough, Manager Bill Rossey said.

Aspinwall Volunteer Fire Department in September marked 125 years of service to the residents of the borough.

Members celebrated with a Fire Fest at the Aspinwall Recreational Field and a community parade.

The Three Rivers Heritage Trail in Blawnox opened in June, bridging a small gap in the path that organizers hope someday will stretch from Freeport to Millvale and beyond.

Friends of the Riverfront, the group that maintains the trail extending 25 miles through several Pittsburgh neighborhoods, said the trail represents an important piece of the corridor.

Borough roads with minimal traffic were chosen for the trail. The pavement path runs along Pine Street and Center Avenue, and is marked by sharrows and signs.

The trail stretches from the Blawnox border to Chapel Harbor at the Water in O’Hara.

The Freeport Road bridge connecting Sharpsburg and Aspinwall closed four months for reconstruction, blocking a crucial connection for people who shop, live and visit both boroughs.

The span was closed in May, forcing a 2.6-mile detour and creating inconvenience for the thousands who travel the stretch each day.

The bridge, which travels over the Norfolk Southern Railroad just west of the Highland Park Bridge, reopened in September.

A public, handicapped-accessible fishing dock opened in July in Aspinwall.

It was paid for through a donation from the estate of Crafton native William Cadwallader, along with support from the Hillman Foundation.

Cadwallader was a veteran of the Air Force who retired as a master mechanic from Duquesne Light Co. He passed away in 2017. His niece and executor, Robin Durr, said he spent much of his free time outdoors.

The donation also paid for the mobile kayaking fleet operated at the park by Venture Outdoors.

The dock features a flyover segment and a handicapped-accessible gangway.

At Camp Guyasuta in O’Hara, cleanup cost more than $450,000. Three bridges were destroyed and two more were damaged at the Boy Scout-owned camp.

The July 2 flooding also washed away part of the Squaw Run trail and deposited piles of debris at McCahill Park in Fox Chapel.

“We had to open up the sewers and try to get that water to recede,” Marsico said.

The Blawnox Swiftwater Team, run by fire Chief George McBriar, performed multiple rescues of people trapped in cars along Squaw Run and Field Club roads in Fox Chapel, and others in their homes in lower O’Hara near Margery Drive, where water climbed eight feet in basements.

In Sharpsburg, Mayor Matt Rudzki said water climbed to the bays of the Sharpsburg fire hall and rose high enough to cover the fire hydrant at the municipal building along Main Street.

The road at Sixth Street, between High and Clay, was completely torn up. The storm left 15,000 without power for a short time.

More than 700 bins of materials were removed from Kerr Elementary classrooms during September’s mold remediation at the Fox Chapel Area school.

Mold was discovered Sept. 13 at Kerr and issues kept students from class for six days. Crews worked 24/7 to sanitize classrooms, and leaders agreed it would be cheaper and quicker to purchase new supplies such as paper, pencils, markers and books.

Leaders of the Sharpsburg Community Library appealed to residents to support the Main Street facility or risk losing it.

McConnell said 2015 was the only solid year the Sharpsburg branch did not operate under a deficit. Shortfalls in other years have been covered by cash reserves which are running low, she said.

No current employees will be let go, nor will any programming be cut.

She said a multi-pronged action plan will address balancing future budgets and include the kickoff of a fundraising group called Sharpsburg Friends.

Fox Chapel Area students joined a nationwide rally in March against school gun violence. More than 150 students and teachers came together at the school’s football stadium for 17 minutes of silence to support the ENOUGH National School Walkout.

The date marked the one-month anniversary of the shooting at Marjory Stoneman Douglas High School in Parkland, Fla.

Students read aloud the names of those killed and then lay down one-by-one on the snowy field.

Students said they believe they can lead the change that society needs.

O’Hara council gave approval to owners of a medical marijuana facility in October to grow and process marijuana.

Maitri Medicinals will operate a warehouse in RIDC Park, where owners said they will produce dry leaf, salves, concentrates, ointments and pills. A first crop will be planted by spring.

The warehouse is at 575 Epsilon Drive.

Maitri earlier this summer was among 13 chosen from 91 applicants interested in opening grower/processor facilities as part of the state’s Phase 2 medical marijuana program.

Maitri, along with Hanging Gardens in Johnstown and Penn-Alt Organics in Lemont Furnace, beat out 20 other applicants in southwestern Pennsylvania.