The mission of Aspinwall Riverfront Park is to create an independent, self-sustaining community treasure and catalyst for the trail system.

Aspinwall Riverfront Park is dedicated to the memory of Charles R. Burke. Charlie to his friends and “Champ” to his family. Devoted husband, father, grandfather, and citizen of Pittsburgh and the Fox Chapel/Aspinwall communities. 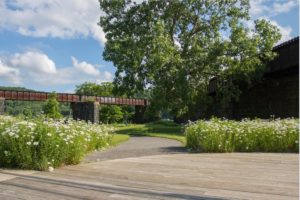 Aspinwall Riverfront Park began as a community’s dream to connect with the River and someday be able to get on a bike a ride to the City.

In 2011, when the Aspinwall Marina was nearly sold for commercial development, the idea that the property could become a public park captured the imaginations of thousands of people.  To buy the property, over 2,500 people of all walks of life, the several foundations and businesses and Allegheny County came together to raise the $2.3 million needed in a little over six months.  Over $14,000 was raised by children alone.

Aspinwall Riverfront Park is an independent 501(c)3 corporation governed by a board of directors and unaffiliated with any municipality.  Unlike many community assets, the Park receives no tax payer dollars, and less than 3% of the funds raised for the Park itself were contributed by government entities.  Aspinwall Riverfront Park is a Pennsylvania State Certified Land Trust.

The average park takes ten years to build.  Given that we wanted the Park to be able to enjoyed by the hundreds of children involved in the project while they were still children, we were determined to open quickly.

The former Aspinwall Marina property was purchased to become a park in November 2011.  Thanks to the Burke family, our visionary board, and the tremendous hard work and generosity of many, segments of the Park opened in just a few years:  starting with ice skating, then our native gardens and the Highmark quarter-mile walking trail in 2014, and the remainder of the Park, with the fabulous “Playground” sculpture given to us on indefinite loan by The Grable Foundation in 2015.  In 2016, we were thrilled to partner with Venture Outdoors/Kayak Pittsburgh to offer public River access and kayaking at the Park.   Our Welcome Center with its public restrooms and spaces for classes and events opened in the spring of 2017.  In 2018, we opened our Boo Boo & Tiger’s Playground, our dog park, and Bill’s Dock, our fishing pier.  In 2019 Farmer X Baker, the region’s first shipping container cafe opened at the Park.  We also transformed the crumbling parking lot that was once at the center of the Park into a lawn and handicapped accessible parking area.

This year, we are working to achieve our biggest goal yet – to acquire and ease 15.02 acres downstream towards the City to more than double the size of our current Park.  Learn more about our efforts here.  As part of this effort, we completed a park and trail design process involving input from more than 300 people and 26 local organizations.   If we are successful, we pledge to open 1.5 miles of trail to the public within two years.

Shortly after acquiring the Aspinwall Marina property, the Park conducted a survey of more than 1,800 people to determine what the public wanted in a Park.  Trails, nature and a playground were the top three requests, followed by River access.  We’ve prioritized our projects accordingly.

Aspinwall Riverfront Park is an great example of creating nature.  Primarily with volunteer labor, we removed 2 acres of concrete and 100,000 pounds of garbage from the site. 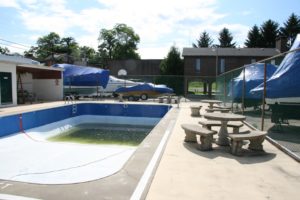 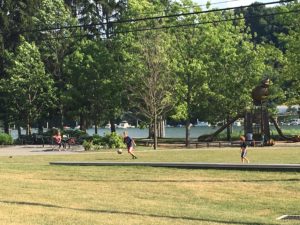 The property we purchased was completely flat.  We created a sled-riding hill by grounding up the buildings on the site and using them as the base for this hill and other land forms.

The theme of the Park’s design is “raindrop to rivers””.  Land forms undulate out from a center wetland garden, and native “raindrop” gardens dot the landscape.  Bands, or “rivers” of native plants flow over the undulating hills.  Because the Park is small and in a densely populated area, the land forms  are designed create a sense of being in nature, of privacy and space. 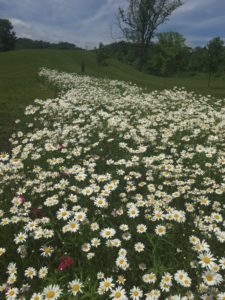 A “river” of flowers in the Park